Forged Performance is proud to announce that Haltech has released their Plug In ECU for the 350z and G35, this is a direct replacement for the factory ECU. That’s right, the OEM Nissan ECU can now be completely removed from the car. It is a fully programmable ECU that interacts directly with all the standard Nissan sensors and on board computer systems, it even works with the factory CAN bus for diagnostics and troubleshooting.

True Stand Alone
• New ECU is a complete stand alone.
• The OEM ECU is not required at all as the Haltech ECU takes control of all functions, unlike any other tuning solution.
• No more check engine lights, idle problems, torque limits or rev limiters.
• The Haltech allows full control over the engine, without complications or compromise.

Order yours today on the Forged Performance Online Store .

Saturday proves to be an interesting start to OLOA

The first event of OLOA 2012 is the challenging wet skid pad. With Tire Rack’s sprinkler system coating the skid pad with a uniformly deep layer of water, each competitor took their turn driving their cars around the circle.

It’s amazing what you can pack into a GT-R!

Although the GT-R can usually hold it’s own on the wet skid pad, the top spot has traditionally been the domain of lighter and more nimble cars. But this year, to everyone’s surprise, the first place spot was in fact, taken by a GT-R, but one that was shod with massive 335 Michelin Pilot Super Sport Tires at all four coners! Incredible…many of us had wondered if the larger square setup vs. the 315′s we run, would be good in the wet. Todd and Tyson tested out this theory, which resulted in the overall win by a HUGE margin. Congratulations to them.

PSS 335 Sqaure was FAST on the wet skid pad.

We went into the wet skidpad expecting to finish towards the front of the group and we did. Catesby wheeled the car to a very respectable 6th place finish and reported the car felt superb.

A few more competitors take their shot at the wet skid pad. Smooth, steady balance is the key to a good run.

So with the first event under our belt, we hoped in the GT-R and made the 15 minute drive to the banked oval. Neither of us knew what to expect and we simply wanted to get through it in one piece and move onto the meat and potatoes portions of One Lap of America.

Catesby put on quite a show, to say the least. Launching the car at 4500rpm, the Forged Performance GT-R launched itself into the first turn and stuck like glue. The first lap around the ovall was abosolutely text-book. With tires warm, the second and final lap started even better than the first. On the exit of turn one he was absolutely flying off the corner…maybe a flying a bit too much. Tracking out to within a few inches of the concrete wheel he hauls it down again at the start of turn two. Hard on the brakes, the car slides 45 degrees sideways with Catesby expertly and miraculously keeping it off the wall for the second time. At this point, knowing that the lap would probably be a throw away he layed into the throttle again and drifted the car towards the wall AGAIN on the exit and again keeps it less than a foot away from the concrete wall.

As the crowd erupts in applauds, Catesby takes a bow and exits the track giving us all a big thumbs up. It wasn’t fast but damn it looks good. A quick check of the timing and scoring showed he still managed to pull of a 2nd place overall despite being sideways for half of the second lap.

Autobahn updates coming next..we are here at this beautiful facility. This is where our new aero improvements will really shine. 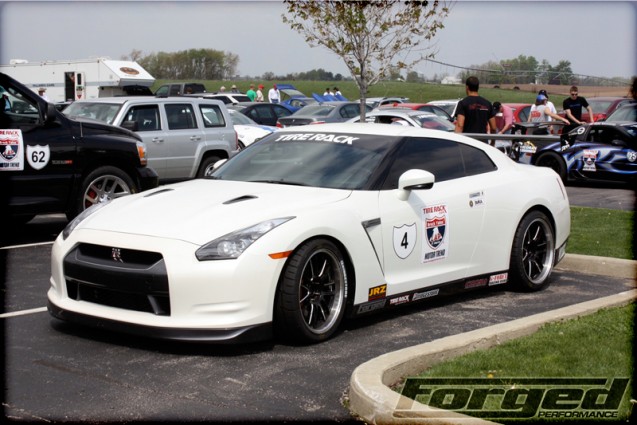 Catesby Jones, driver and owner of the Forged Performance prepared GT-R takes home a second place trophy at the annual 2010 Motor Trend One Lap of America race. This 8 day grueling event is a legendary test of both man and machine. The teams are required to compete on just one set of tires, and must drive to each of the designated tracks all over the eastern half of the USA. No tow rigs or support vehicles allowed. Catesby’s GT-R left our facility with just 1100 miles on the odometer, and it now has 6300 miles on the clock!

The car is now back at Forged Performance headquarters for a thorough inspection and once-over. Next year, Catseby has big plans for his GT-R and will gunning for the number one spot!

Forged Performance continues to lead in many facets of professional and amatuer motorsports and many of the strategies and techniques we employ on race vehicles are also utilized in our street builds. 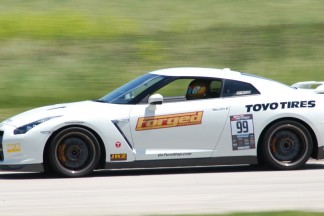